Know before you grow

Whether you’re growing a local program or expanding to a new state, there is so much to know before you grow.  What program will you offer?  Where?  To whom?  How much staff do you need?  How much will it cost?  Do you have support of your Board, your partners, your funders, your volunteers, your staff?  Some questions are easier to answer than others.*

One question you rarely hear:  how much money is there to support my growth?  Sure, you might hear “will funders fund me?”, but never: “how much money is out there?”  Why don’t we ever ask how big the pie is?  Well, because no one knew!

“So, how do I use The Map?”  Here’s a typical story of an organization using the data to make better decisions, faster:

Our Favorite Educational Nonprofit (OFEN) was in three cities and growing.  They had an ambitious plan to expand in Boston, investing in physical space, staff and outreach.  Ultimately, they had visions of serving the whole region – the need is everywhere, and OFEN’s program is proven to help.  The Board and staff were itching to grow faster than their plan.  An opportunity presented itself in western Massachusetts, just an hour outside of Boston.  It was consistent with their mission and program.  The overwhelming urge was to go for it.

The ED knew what he needed to raise to fund his Boston expansion.  It was an aggressive target, increasing OFEN’s fundraising by a significant percentage year over year to fund a capital campaign and significantly higher annual operating expenses.  With some quick back-of-the-envelope calculations, he estimated it would take $500K annually to run the program in western MA.

Then he asked the critical question:  How much philanthropy is in western MA?  Looking at The Map, Boston is the 10th largest philanthropic market in the country at $6.9B.  No other cities or towns in Massachusetts show up in the top 50.  The smallest, #50 Providence, RI, is $1.1B, or 16% of Boston.  All the dots west of Boston are far smaller than Providence – so small, they are hard to see.  Think of the dots as dollar signs… and there aren’t many.  (Go ahead, click on the map to get a good look.) 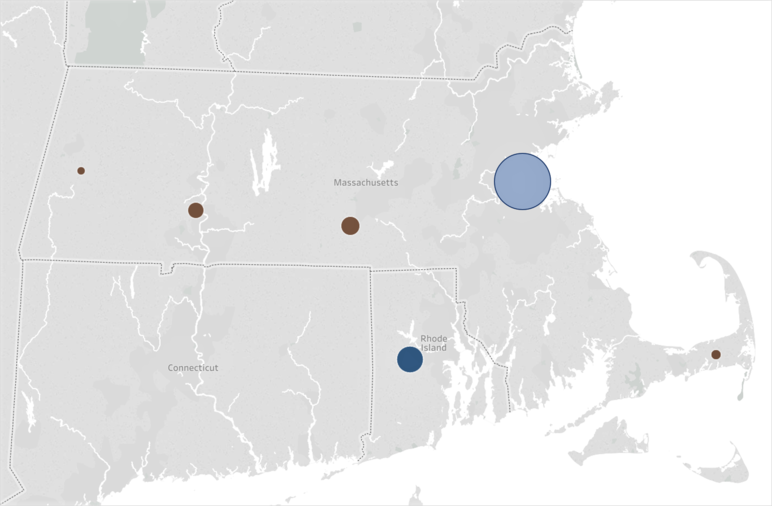 He took a quick look at what peers were raising on an annual basis and the answer was clear.  Funding the start-up in western MA would require support from the Boston philanthropic community.  That means staff time, potential prospects and dollars diverted from the big push in Boston.  And, likely, it would require on-going support as well.

With this answer, the ED went back to his board: “If we do this, we slow down Boston.  Let’s focus on Boston and revisit in a year.”  It was an unpopular decision – until he shared the data.

The data and approach OFEN used to come to a better decision, faster is captured in The Map of Opportunity: A Practical Guide to Philanthropy in the U.S.  It’s available on our website.

Let’s be honest, sometimes you have a chance to really plan ahead; other times, not so much.  Either way, take the time to know before you grow – use The Map to answer that all-important question “Where is the money?”.

Yours in pursuit of better decisions, faster,

Anna, Ben, George and Harleen, aka The Room40 Group

*With experience as nonprofit executives and strategy consultants, we specialize in answering these sorts of questions.  Want some help? Let us know.

* These fields are required.